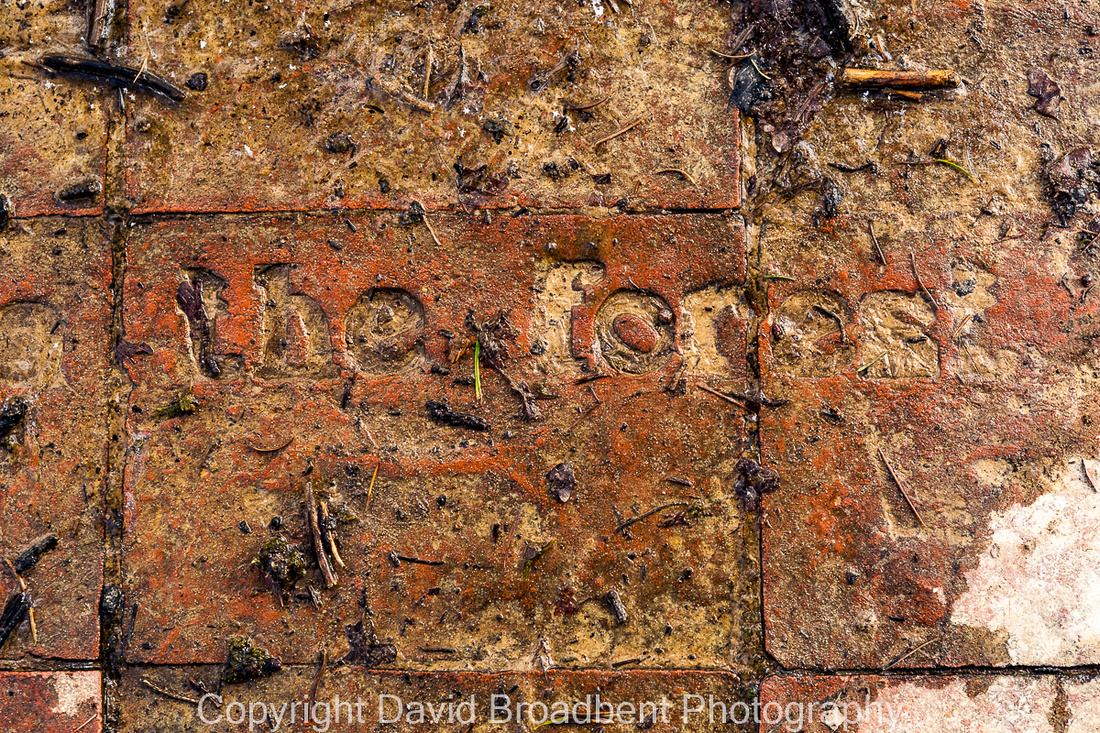 It’s great to “find” something isn’t it? Where does that come from? Self-interest or the instinct for survival or the thrill of getting lucky?

I was out in Speech House Woods during the last smattering of snow that in these climate change days the news likes to call “heavy”. The ground was unusually covered in fine white powder beloved of skiers. The forest looked glorious in its coat of bare bones winter beautiful. Speech House Woods is home to the Forest of Dean Sculpture Trail and I’d been asked Cathy Mager – Creative Director at the Trust, to photograph the Natasha Rosling work “Threshold”. It’s the newest work on the Trail and hadn’t yet been photographed in a winter setting. The Trust maintains an archive of its works and development housed at the University of Gloucester. 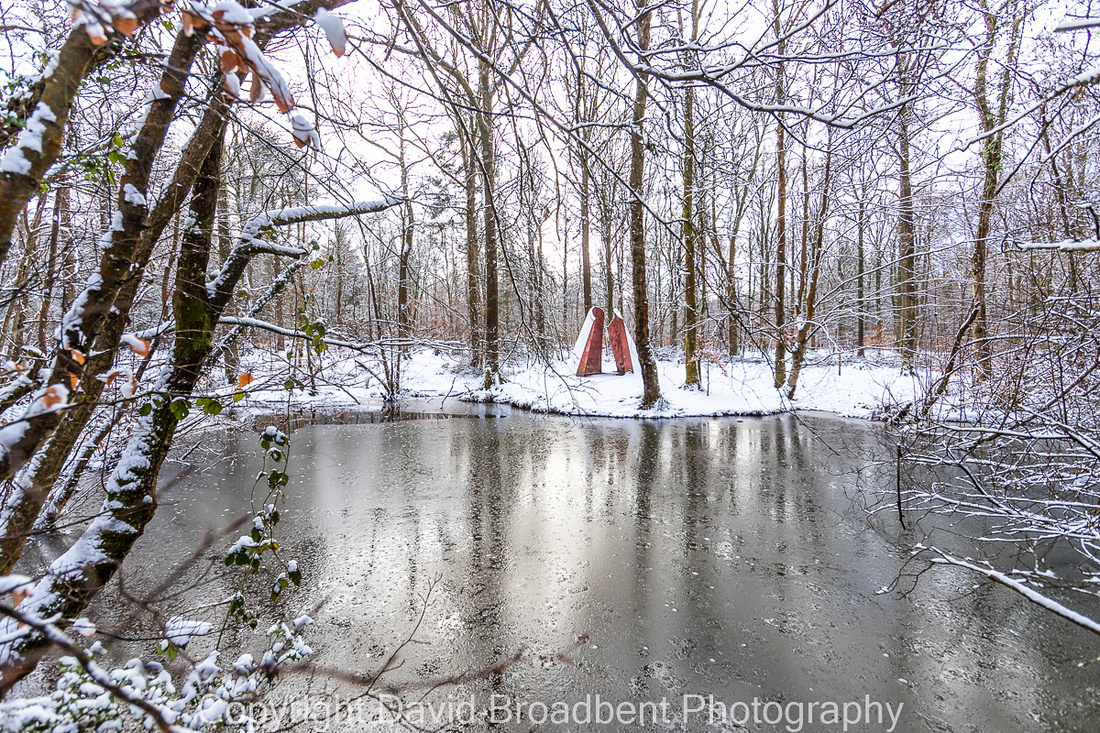 A walk in the snow along the Forest of Dean Sculpture Trail, Speech House Woods, Gloucestershire.

I couldn’t wait to be honest. I’d been involved in documenting the installation of “Threshold” since the start of construction. Having photographed the artist, her team and Natasha’s creation in its various stages we’d already discussed how might through the seasons. The dyed red concrete body seemed to glow in the stark crisp white of the snowfall, which had itself been windblown and drifted up one side of the sculpture. The drift coated almost the entire windward face leaving only the rose red edge exposed emphasising the angled gap between the two walls.

It’s such a striking work in such a great position. I’ve been intrigued right from the beginning to see how the finished work, with its cast textures of Clearwell Caves on the inner faces, would look as it matured into its location. Fascinated to see it in all sorts of weather and light conditions as nature reclaims the site and gathers in around it.

I remember also talking to Natasha about her sculpture, her first major public piece. In conversation with all of the artists of permanent works on the trail I’ve always been fascinated to hear their views on the legacy they are creating. These large commissioned public pieces live for a long time. Possibly even longer than the artist themselves. Some of the artists haven’t spent much time thinking about this issue so consumed as they are in the creation of the work to an opening deadline. For some reason, knowing of this legacy, and how it feels, has always piqued my curiosity. 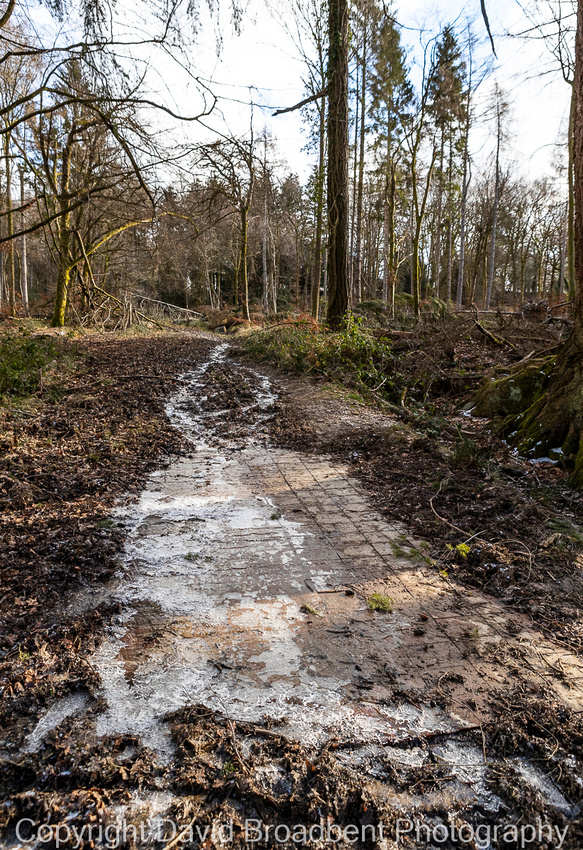 Anyway, good snow is a fleeting thing as our weather patterns change and so I took the opportunity to spend some time out walking the trail. The young terriers accompanied us and were loving their first taste of a proper snow fall. All of the scents (and sounds) of the forest and its animals are heightened as the snow covering deadens the forest floor. The dogs where in hyper mode straining at the ends of the lead. We were having a very pleasant day indeed! All good things come to an end though and so having revisited several art works on the trail, we took the route less travelled and cut back toward the car park along a minor, wet and muddy track.

Here, along this sodden path, lined with a tangle of timber limbs blown out of the canopy, we found something. We didn’t know it at the time but we had stumbled across “Farewell to the Forest”. 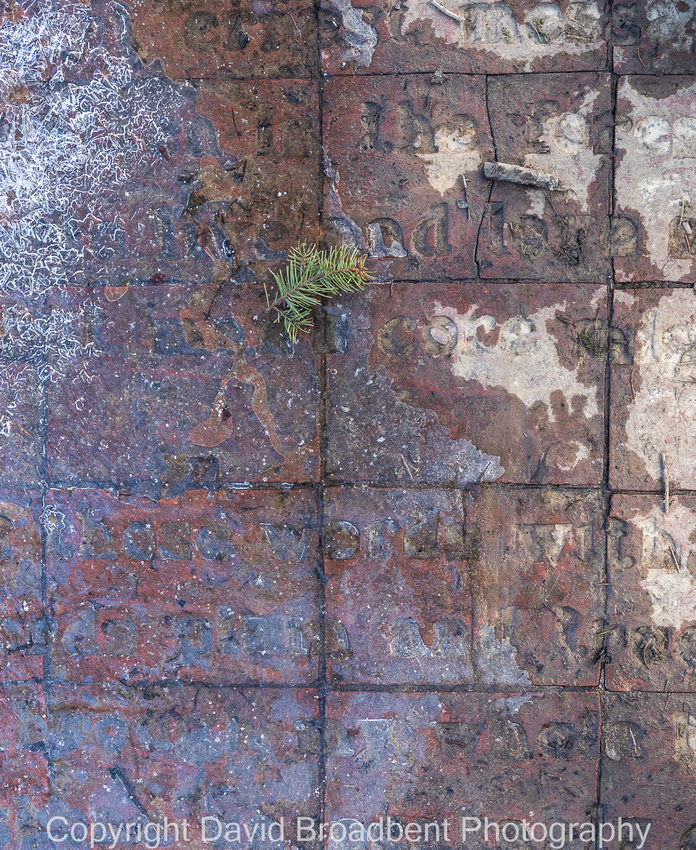 Obvious in the landscape because of its geometric contrast to the jumble of the forest floor, mud and footpath ruts, but also blended and camouflaged into its surroundings – “Farewell to the Forest” is a brick path constructed in warm coloured clay bricks inscribed with the lyrics of a German folk song.

So, we had definitely found something. Something that was placed into the landscape, a sculpture viewed in two dimensions. But not something that I had ever read or heard about. Later I asked Cathy about this find of a brick pavement in the woods and she told me all about it.

The sculpture is by an artist called Reinhild Beuther and was part of a curated collection of works for the Trust from the years 2000/2001 – so 20 years ago! Respected artist Neville Gabie brought together s collection of works under the exhibition theme “Underneath”, of which this was just one.

“Farewell to the Forest” translates in German as “Abschied vom Walde”. It’s the title of a folksong by Felix Mendelssohn Bartholdy from the early Romantic period with words attributed to Joseph von Eichendorff. The artist Beuther knew of this song because of her German roots. Her mother used to sing the song that speaks about the forests as both good and scary, laden with resource and myth. Beuther wanted to link the similar traditions of the forests of Northern Eastern Germany with those of the Forest of Dean. She commissioned a local brickyard to make the pavement. Each inscribed brick handmade and imprinted with an English translation of the folk song. At the time, singers were invited to the forest to perform the song in its original tongue. This must have been a great thing to have heard in the woods under the shade of a large Beech tree. 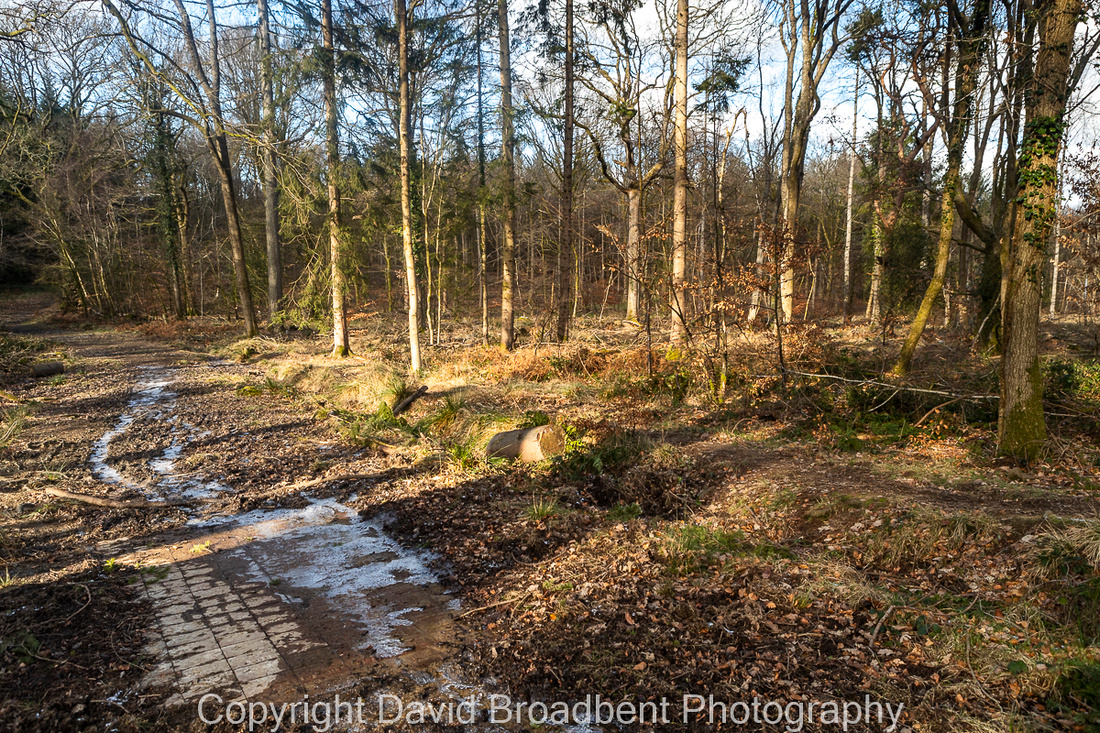 In pictures of the work from the time of installation, the perspective shows the work as flat and level in the ground. When you visit this art work you’ll find that it is anything but. Rather, it is on a sympathetic gentle incline of the track itself as it heads in the general direction of the Speech House Hotel. If, as we did, you find the sculpture by walking up the bank, the imprinted lettering is more obvious because of the angle than it is from above. 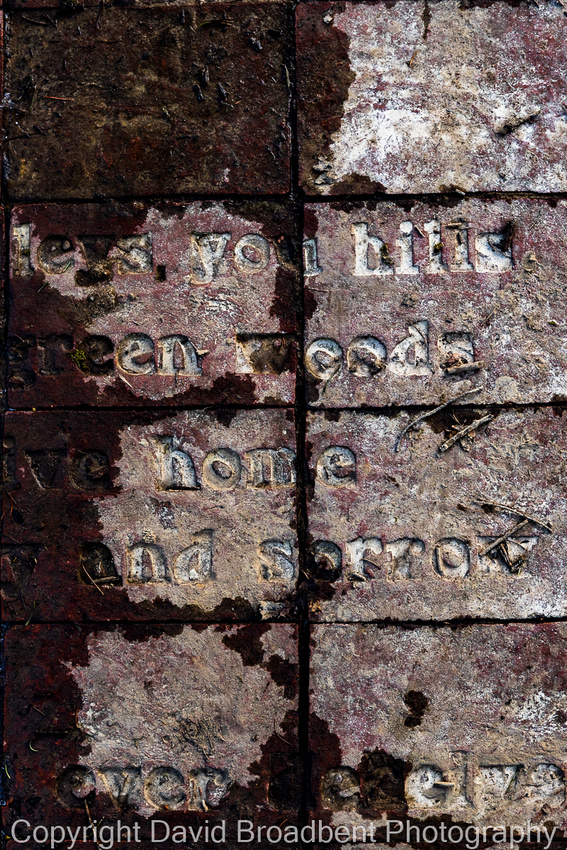 The work is “lost” because it no longer forms a part of the official sculpture trail and so it doesn’t feature in the trail guide or information. Sculpture trustees considered restoring the work a few years ago but decided to leave it undisturbed. Actually, I like that it’s lost. I like that there is something unexpected to find walking the sculpture trail. I like that there is an enigmatic piece of art that is there to be found again and again by everyone who encounters it. I like that I had to ask questions and research to discover more about the brickyard piece and I like that not everything on the trail is in a leaflet. There is mystery and discovery in art anyway and finding a work that is new to you is really exciting! This work is lost but it is not the only lost work on the trail. Do you know of others?

And then there is that legacy question again. I’m sure that Beuther didn’t expect her work to live forever. But here we are 20 years on and it’s still there. OK, one of the bricks has cracked and the imprinted text is filled in with forest dirt. Small pieces of the canopy above now litter the surface transforming the pavement as flotsam changes each new day. The incline of the track invites the winter thaw to form snaking rivulets under the ice. In all of the seasons, water run-off chooses a different daily route across this artistic interloper to the forest. Close up inspection of the more delicate areas shows the fabric matrix of the brick is just beginning to show through the smooth and steadily eroding surface. Imperceptibly and in a geological time scale, the brick will wear and soften. Soon, the water will find a weak spot and the flow will gather and concentrate along it. Tree roots will disfigure the ground beneath to create undulations and the winter frosts will continue to wither the bricks mineral fabric. One day the text will erode completely, but the work, the idea, the intention is still there –being wonderfully reclaimed by nature. Reclaimed and transformed. Transformed from how it was conceived and intended as a crisp brick surface pavement in a woodland glade into a more mellow piece that is blended and semi-consumed by its surroundings. An intriguing bit of art with German roots is now living among the roots of England in the Forest of Dean – there’s something really nice about that! 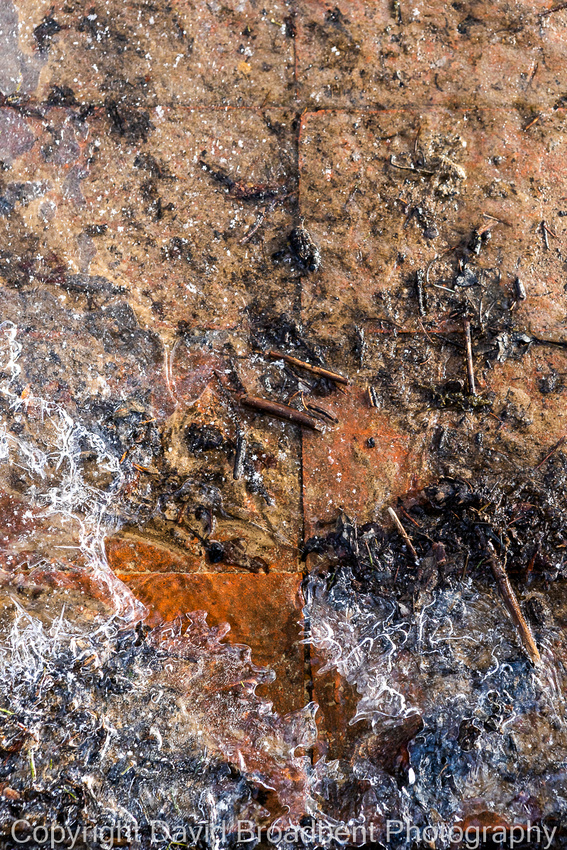 The Forest of Dean Sculpture Trust and Forestry England have worked in partnership for the last 30 years to create this Sculpture Trail that attracts 300,000 people per year. The works, some permanent and some temporary, are specific to the Forest of Dean and are deliberately discrete in the woodland. The idea being that visitors have to seek them out or come across them by chance. The trail guide is just that, a guide. The real discoveries of the works themselves, finding some of the “lost artworks” and how you interact with them is all up to you.

For more information on the work of the Trust and to connect with them via social media https://www.forestofdean-sculpture.org.uk/